The Utah Jazz are in dire need of a solid back-up for star center Rudy Gobert after trading big man Derrick Favors to OKC just to resign Mike Conley this offseason. They certainly got their guy as it was reported that Hassan Whiteside has signed for the Jazz, per ESPN’s Adrian Wojnarowski.

After playing for the Heat, the Trail Blazers, and the Kings, the Jazz would be Hassan Whiteside’s fourth team in four seasons.

Whiteside would be a good backup as he is an experienced defensive center capable of producing solid numbers off the bench.

After spending his first two seasons with the Kings very early on in his career, Whiteside went overseas as he struggled to claim a rotation spot in Sacramento. He eventually returned to the NBA after 2 years and signed with the Heat. Miami took a chance on him and he immediately capitalized as he had an impact due to his length and shot-blocking skills.

The center’s stint in Miami was probably his most successful one so far. He was named in the 2015-16 All-defensive team, was a two-time block champion, and a rebound champion with the Heat.

After a lackluster season with the Kings last year wherein he averaged just 15 minutes, The Jazz will hope that he regains his form back.

It would be extremely difficult to get inside the paint next season in Utah as the Jazz will have two towering bigs in Gobert and Whiteside who are excellent shot-blockers. 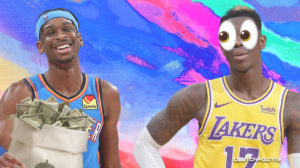